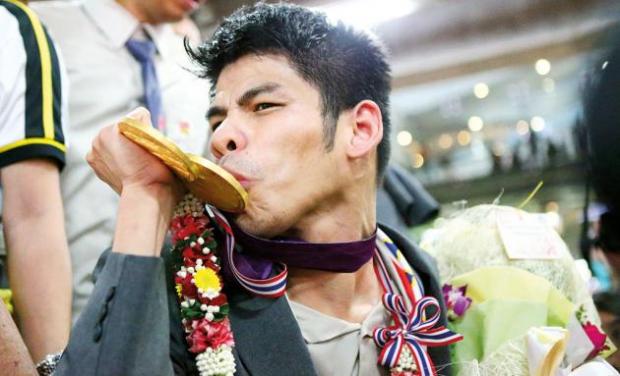 The other gold medals came from the four-man boccia team led by Pattaya Tadtong, and fencer Saysunee Jana in the women’s individual epee. Pattaya went out with a bang after winning his second gold, in the men’s individual boccia a few days before the Thais’ return home.

The Thai athletes were greeted at 3pm yesterday at Suvarnbhumi Airport by Sombat Kuruphan, assistant minister for tourism and sports, Sports Authority of Thailand governor Kanokpan Jullakasem, Thai Paralympic Committee Foundation chairman Jutinan Bhirombhakdi, their families and a large crowd of fans, who cheered and waved Thai flags. Bouquets of flowers were presented to athletes, some of whom were reduced to tears by the emotion.

via Paralympians light up airport with gold haul – The Nation.