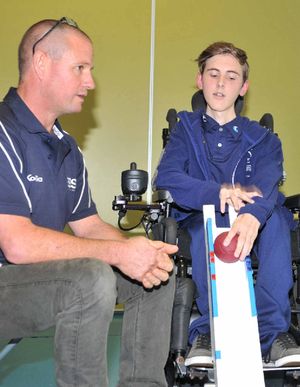 AFTER a series of wins at the National Senior Boccia Titles, Tait Jenkins has his sights firmly set on competing in the Paralympics in Brazil in 2016.

Tait, who only took up the sport about 18 months ago, took out the overall best and fairest award and finished second in the pairs competition at the national titles staged at the Academy of Sport and Recreation in Sydney recently.

He was also a member of the Australian team that won the Trans-Tasman Cup against New Zealand.

ON TARGET: Paralympics hopeful Tait Jenkins works on his game with exercise physiologist Mark Roberts after starring in the Trans-Tasman Cup.

Tait is already a member of the Australian Paralympic boccia team but his next challenge is to be at the top of his game for the Australian Oceanic Games to be played at Sydney’s Olympic Park in October.