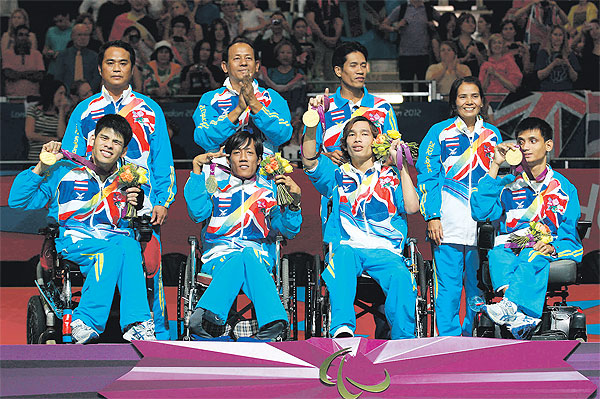 Pattaya Tadtong, Witsanu Huadpradit, Watcharaphon Vongsa and Mongkol Jitsa-Ngiem won a gold medal in the mixed team of the boccia BC1-2 final when they beat China 10-5 at the ExCel Arena in London in September.

The four wowed the audiences with their performances and were welcomed back as heroes when they returned to Thailand later that month.

Each gold medallist received a six million baht award from the government.

Boccia became a Paralympics sport in 1984 and Thailand has sent a boccia team to compete several times.

Boccia is played by athletes suffering from cerebral palsy, or other conditions affecting motor skills.

All events are mixed gender and include singles, doubles and team matches.

The game has relatively simple rules. An athlete has three balls to throw at a white target ball.

The one who can place the ball closest to the target ball will score a point.

Inspired by the success of the Thai boccia team, state and non-government agencies working on promoting the rights of the disabled came out to pledge support for disabled sports.

Prime Minister Yingluck Shinawatra lauded the athletes for making their country proud and vowed to provide more support for disabled athletes who want to attend the Paralympics Games.