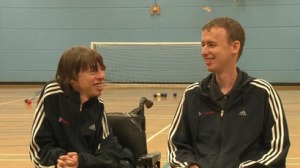 Britains push for boccia medals continues today as the McGuire brothers play off for bronze against Canada, after losing their semi-final against Brazil yesterday.Click here to see Boccia: Everything you need to know graphicThe precision sport, fairly similar to bowls, is one of the least known in the Paralympics but it is one at which Britain usually excels. Team GB won gold and silver medals in boccia in Beijing and could deliver more success in London in the pairs BC4 event at the ExCeL Centre.Yesterday Stephen and Peter McGuire lost their semi-final 3-2 to the world No 1 pair of Dirceu Jose Pinto and Eliseu dos Santos. The Brazilians will face the Czech Republic in this afternoons gold-medal match, after the McGuire brothers play Canada for the bronze at 9am. There is also a British team still competing in the mixed team BC1-2 event.

via Boccia: McGuires fight for podium with Canada – Paralympics – Olympics – The Independent.