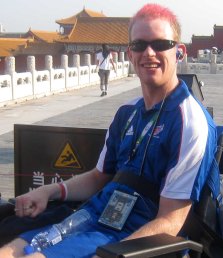 PARALYMPIAN Dan Bentley, who is known as the Bentley Bomber by his team mates, was the guest speaker at the most recent meeting of thebestofthaverhill, which took place at Days Inn, Haverhill.

Dan plays the paralympic sport of Boccia, which is similar to bowls and for athletes with severe disabilities such as cerebral palsy and muscular dystrophy.

He won a gold medal with the Boccia Team in Beijing 2008 and has been selected to represent Team GB again at London 2012.