A determined teenager who has overcome his disability to be a budding sporting champion has been nominated for a top award. 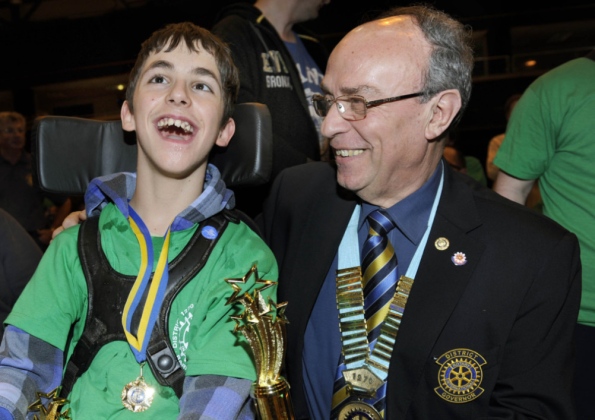 Inspirational Thomas Holmes, aged 15, has to use a wheelchair because of cerebral palsy but has scooped a host of medals for the Paralympic sport of boccia .

The youngster, a pupil at King Ecgbert School in Dore, is now hoping to take home another prize from the Yorkshire Child of Courage awards next month.

Thomas’ proud dad Martin, of Heeley, said: “We are absolutely ecstatic that Thomas has been nominated.

“Thomas never lets anything stop him.

“If there is any obstacle there he will try and get round it.

“He started off playingboccia three or four years ago and he has just gone on from there. At first he thought it was a bit boring but he just got into it.

“He took part in the Rotary district disability games in Barnsley and did so well he came home with four trophies and medals.”

Thomas won a Star Superkids award for his triumph over adversity earlier this year – and has even motivated his dad to become a qualified boccia coach.

He was nominated for the Yorkshire Child of Courage prize by Karen Codling, chairman of the Sheffield Smashers Boccia club which Thomas and his family are involved with.

Karen, a partner at law firm Irwin Mitchell which sponsors the club, said: “In the two years I have known Thomas he has come on really well.

“I have learned a lot from Thomas and now I can’t believe how competitive he is.

“He has done so well in all the competitions we have entered him into and he always wants to be on the winning team.”

Winners of the awards – which aim to recognise youngsters across the county for their achievements and bravery – will be revealed at a ceremony in Leeds on Friday, October 4.